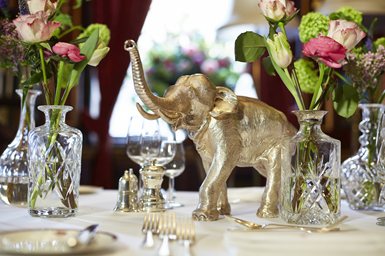 In July 2018 the lodge held a summer dinner at London's elegant Oriental Club. Following drinks in the courtyard, members and their guests dined together, most opting for the Club's famed curry, which was judged a great triumph by all. The Lodge holds regular summer social events, notably the annual day trip to Henley Royal Regatta, but the previously popular summer garden parties have never been replaced after they came to an end several years ago. The dinner was intended to plug that gap in the Lodge's social calendar, and all present expressed the hope that it might become a regular activity. Unfortunately the Master of the Lodge was prevented from attending by professional commitments, so the Senior Warden presided. By coincidence, the Board of Grand Stewards of the year was also dining in the Club on the same evening. Our former Secretary was a member of last year's Board, and so he disappeared for some little while to sample the "red apron port", before returning to us in the cocktail bar where the evening wound down. 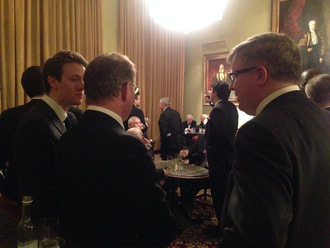 The Installation meeting of the Lodge took place in April 2014. The brethren gathered at The Chequers pub for drinks, then re-convened at 10 Duke Street for the ceremonial part of the evening, where they were joined by a large contingent from Wales, the homeland of the new Master, Bro Grey. Afterwards they moved on to White's for a champagne reception, and then a sumptuous installation banquet, with port generously provided by the new Master's father. The traditional Belton Bon-Bon Bowl on this occasion contained turkish delight. From here the group went on to the Oxford & Cambridge Club for drinks and further fellowship. When this establishment closed, the brethren took taxis to Soho, and occupied a private room at Milk & Honey Club in Poland Street, for the final part of the evening's celebrations. It was heartily and unanimously agreed that a good time was had by all.

Dinner on a warship​ 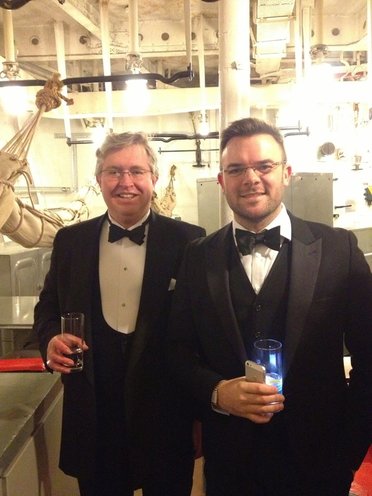 Members and guests toured the ship and enjoyed drinks together, before dining in the Wardroom. Speeches and toasts accompanied the evening, as did several naval traditions, such as the passing of notes on place cards, and the toast of the day. A retired member of the ship's company, Commander Ken Wollan, entertained all present with tales of the Navy and of HMS Belfast, impressing us with stories of the awesome guns in the ship's armament. He also decried the limitations of the modern Service, owing to the inadequate number of ships, and the small size of their compliment, leaving Captains unable to muster sufficiently large parties for operations ashore.

All agreed that it was a marvellous evening and bumper Assistance fun.